I was made to believe that marriage was all about owning a telephone and the liberty to do what you want. Little did I know that this was a plan to ruin my life.

“My parents were only interested in the man’s wealth than my health and wellbeing. It’s about the prestige of the dowry. If they had focused on my education, it would have fetched them a lot of wealth than the dowry they received when they married me off,” said Wilma who was married off to a man who had just graduated from the University.

I was only seventeen years and marriage was not my desire at the time but I thought it was a way of being released from restrictions. The reality is that marriage life was not as I had expected. I ended up in an abusive marriage, a lot of suffering and I nearly lost my life in a miscarriage. I took the decision and file for divorce.

Now that I am back to school, there is hope for a better future. I use my experience to advocate against early and forced marriages because I do not want to see other girls landing into the same trap as I did.

Like Wilma, many other girls in Jonglei state where she hails from have been made to drop from school and forced into early marriage by agreements reached by both parents and the spouse. It has become a norm that only involves the parents and the man without the girl’s consent.

“The issue of forced marriage is at its peak because the community does not respect the law”, commented a participant at a workshop organized by Eve Organization for Women Development which brought together women leaders of and the Women Parliamentary Caucus of Jonglei State Assembly. “Even if the girl is a school going girl, she can be taken away from school and given to a wealthy man. If you want or not, together with your mother, they will treat you the same.”

Leadership training such as this, raises awareness of women and girls on their constitutional and human rights and empowers them to address challenges facing them with the authorities and community leaders.

Participants to the workshop attributed the challenges faced by women particularly the forced marriages to the long periods of conflict and the cultural practices that are discriminative to the girl child.

An official at the State Ministry of Gender said it’s hard to change the culture that has stuck in the minds of people. It will take time for people to understand the harms of early and forced marriages to the community. Early and forced marriage is also promoted by some individuals who got married early and therefore would like others to follow the same steps.

As for Wilma, she was lucky that she was able to get a divorce. Now an advocate for girl child education and speaking against child marriage, Wilma advises parents to take care of their girl children well and allow them study and finish their school.

“I want to tell parents that even when the man comes with too much wealth, ignore the wealth and look at the future of your daughter. She is much wealthier than that man whom you would like to give her to.”

Currently, Wilma is pursuing a bachelor’s degree at the University of Juba.

PrevPreviousHOPE FOR A NATION
NextTHE POWER WHICH RESIDES WITHIN EVERYONENext 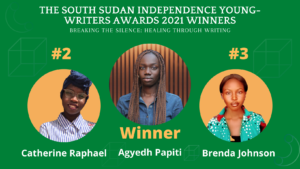