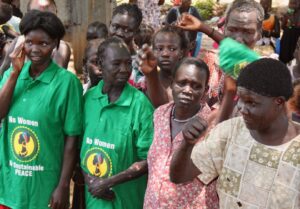 South Sudan’s history is marked by revolutions and civil wars. Every South Sudanese dream of peace and longs to experience it in their life time. For decades now, all we have known is war, killings, rape, displacement, fear, hunger and poverty. At the heart of these conflicts is a combination of root causes such as identity, religion, ethnicity, language, discrimination, unresolved historical grievances, inequality in political participation and distribution of resources.

As a child, I grew up as an Internally Displaced Person (IDP) in the outskirts of Khartoum and attended a displaced primary school as my family could not afford sending me and my siblings to regular or private schools. I thank the Catholic Church that eventually sponsored some of us through secondary school and showed us the door to the University. Life as an IDP in Khartoum – Sudan was not rosy. As South Sudanese, we faced difficulties and discrimination for being from Southern Sudan and Christian. Even after graduating from the University opportunities were still so limited.

Women from the then Southern Sudan did all they could to take care of their families as they could not find decent jobs. Some sold items on the streets of Khartoum and worked as housemaids for the Arabs. Others suffered in the jails of Sudan under deplorable conditions and were brutalized by the Sudan Police for brewing local alcohol to earn money to support their families. Southern Sudanese women however did not give in to the pressure of discrimination.

This history was the main drive and motivation behind the establishment of Eve Organization for Women’s Development. As a young woman, I wanted to contribute to changing the story of South Sudanese Women from that of a victim to that of a victor. We have lived and experienced the bitterness of war and are similarly conscious of the benefits that could come with peace – that motivated us as an organization to invest in inclusive peace. Since its establishment in 2006 in Sudan, Eve Organization has been on the forefront of creating space for women and girls to participate in peacebuilding and decision-making. Eve Organization mobilized women to participate in the Sudan Census (2008), Sudan elections (2010) and the South Sudan’s referendum (2011). The turnout of women was evident in the results of the elections and the referendum.

The declaration of Independence of South Sudan in July 2011 provided a new stimulus that South Sudanese would enjoy the dividends of peace and experience better lives in the land that flows with milk and honey. Given the struggle for liberation and the passion exhibited during the vote for independence, the expectation was that South Sudanese would embark as a people en route to recovery, development, equality and restoring our dignity. The expectation was to be  a rising star that many in the region and around the world would use as a model of transiting from conflict to development. Unfortunately, we missed the bull’s eye on the dart board. Did we not learn something from the more than 50 years of struggle?

Barely two years after independence, the country slid back into a devastating war that lasted for six years. The political instability led to further destruction, killing, displacement and widespread impoverishment of communities. Women experienced brutality such as rape in the hands of armed men and carried the extra burden of taking care of families. From 1955 to 2018, South Sudanese women suffered wartime damages and its harmful effects. Nonetheless, there is no revolution that South Sudanese women have not participated in. They were in the forefronts, experiencing the brutality of the enemy yet never gave up until an independent nation was birthed. They also participated in the peace process and negotiated for an inclusive peace agreement which led to the 35% affirmative action and a number of articles that called for the protection of women including reparations. In spite all this, have they seen the dividends of peace or independence?

In practice – peace is farfetched. Even after nine years of independence, women and girls in South Sudan continue to live in deplorable conditions and insecurity. Women still depend on food rations from the UN, primary health services from the NGOs and many die giving birth – the country has one of the highest maternal mortality rates in the world. Women and girls in some parts of Jongolei, Eastern and Central Equatoria risk abductions, girls are deprived of opportunity for education to thrive and instead are married off as child brides in the name of “this is our culture”.  Between 2019 – mid 2020, more than three girls took their lives in defiance to forced marriages, two were beaten to death by their brothers for refusing forced marriages and in an extreme case, a man shot dead a 19-year-old girl who refused to marry him. When will the women and girls of South Sudan ever live a dignified life?

The current political dispensation clearly does not recognize the efforts of women and to a much larger extent perpetuate the structural inequalities that view women as weak and relegate them to the lowest in the society. The Agreement on the Resolution of Conflict in South Sudan (R-ARCSS) clearly stipulates the need to ensure a minimum of 35% women’s participation (art. 1.4.4 & 1.12.2 of the R-ARCSS) in the revitalized transitional government of national unity (R-TGoNU). However, when it came to the sharing of the pie, women were told – konkooć (wait !!) … “the fish has a lot of bones to be removed”. Can’t the bones be picked by the women themselves? Out of 12 ministerial positions allocated to women, only nine (9) were occupied by women and three positions stolen by “men”. Worse still are the gubernatorial appointments – out of ten gubernatorial positions and three administrative areas, only one female was appointed as a governor of Western Bahr El Ghazal state.

The fact of the matter is that women’s exclusion from participating in the R-TGoNU is due to lack of political will to form an inclusive government and is a violation of the R-ARCSS. This is further backed by imposed barriers and structured societal notions that women are not educated or that women are unwilling to come forward and that’s why they are left out. These arguments are baseless and not an excuse at all for not full-filling the 35% minimum affirmative action. South Sudan has enough qualified women political cadres in all the parties. If it is about loyalty, there are many women who are stunt supporters of the different parties. In terms of Education, we can as well as count the number of uneducated men who are in positions of power.

For South Sudan to become a viable state and not fail its future generations, there is need for a deliberate call to action to address the structural inequalities and it root causes through short- and long-term strategies. This calls for strong leadership in the country and participation of all partners and friends of South Sudan. Furthermore, the growth of the women Civil Society Organizations in recent years at both national and states level provides an exceptional opportunity to advance women’s engagement and participation in the public and private sector.

Women have a lot to contribute to the development of South Sudan. A nation that does not recognize and tap into half of its human resources is impossible in realizing sustainable peace and development. It is evident that South Sudanese men alone have failed to bring sustainable peace to South Sudan since its independence. It is consequently paramount that efforts to build peace should support inclusivity and ensure that structural inequalities are removed and women accorded their deserved seats at the table. Just like Margaret Thatcher said: “In politics, if you want anything said, ask a man. If you want anything done, ask a woman.” Ask the women of South Sudan and witness the change they can bring.