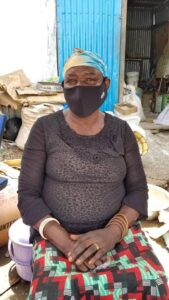 COVID-19 started in China in late 2019 and quickly became a globally shared crisis. The virus was first confirmed in South Sudan on April 5th, 2020 not so long after the formation of the unity government on the 22nd of February. The formation of the government was marred by several challenges such as inter-communal conflict and cattle raiding with communal violence in Lakes, Warrap and Unity States, the arrival of dessert locusts locusts in several countries in Eastern, Central and Western Equatoria and Lakes posing an extra threat to food security and livelihood.

The government established a high-Level taskforce (HLTF) on COVID-19 tasked with the responsibility to curb the outbreak, which was later on reconstituted and is currently referred to as the National Taskforce on Coronavirus Disease. The previous task force was formed of mostly politicians and decisions made in regards to COVID-19 were detached from the reality on the ground and did not reflect inclusivity and gender-sensitive perspectives that would ensure the best interest of all citizens.

Decades of conflict brought about noticeable shift in the way of life of South Sudanese families, especially in the area of gendered division of labor.Due to large number of men going to war and a large number being killed, there was an increase in the number of women-led households. More women took and continue to take the opportunity out of necessity to actively engage in petty trade and construction in order to provide for their families.

The lockdown decree taken by the first task force, did not take into consideration the impact on the income of the vast majority that engage in street vending and tea selling – who are the women. The closure of such small businesses became detrimental to families as no alternatives are provided. Food item prices spiked and local transportation cost doubled. As a result, the social and economic welfare of women and other vulnerable groups such as the elderly and persons with disabilities continued to deteriorate as the lockdown prolonged. Some women headed households reported to not having food to feed their families which put many families in jeopardy of running the risk of being evaded through other means such as bribes and violence.

Another issue that needs attention during this crisis is lack of adequate information among citizens, especially women and girls, which leads to the pandemic and its possible effects not being taken seriously. In efforts to combat the outbreak, Eve Organization engaged in awareness raising and sensitization of the public on corona virus and preventive messages to be taken, through media and caravan campaigns. The media campaign consisted of radio jingles, recorded in English and simplified Juba Arabic, posters, stickers, graphic designs posted on social media pages and use of hashtags. The campaign majorly targeted women and men in markets such as food vendors, who mostly remain vulnerable to contracting the virus,